“Molson” , a 2 year old, male Labrador Retriever, was surrendered to Labrador Retriever Adoption Services by an area shelter after a six month stay there. He was surrendered by the shelter due to a chronic skin condition that was not responding to the minimal treatment the shelter was able to provide. When Molson first came to us, he had a very thin hair coat all over, and was bald in multiple spots, including his chest and abdomen, around his eyes, and on the insides of his legs. His skin was very red and irritated, and he had multiple areas of deep scratches, where he had attempted to relieve his pruritus (itchiness) by scratching on his cage door. 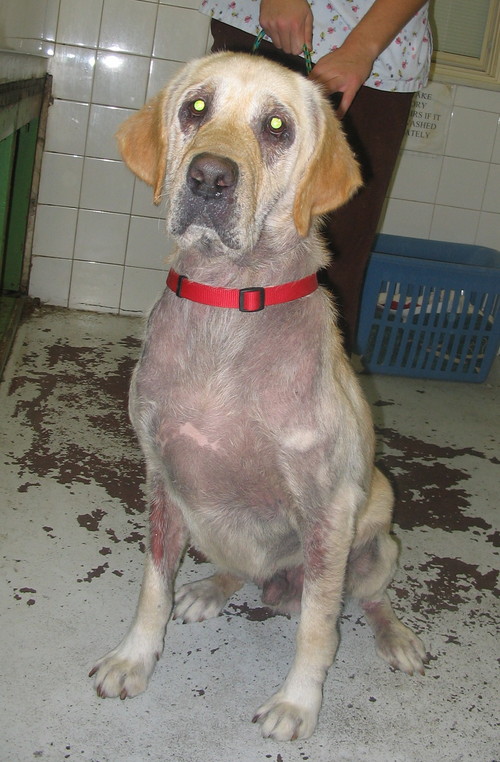 In order to evaluate all that was going on with Molson, we decided to perform a complete dermatologic work-up which consists of bloodwork, and multiple tests on his skin. When a pet is pruritic (itchy), there are many possible causes (such as food or environmental allergies, fleas or other ectoparasites, fungal or other infections, etc.), so it is very important to rule in and out some of the possibilities in order to determine the best treatment plan.

Molson’s bloodwork came back essentially normal, aside from an elevated white blood cell count, which is indicative of bacterial infection. His bloodwork indicated that his liver, kidneys, and pancreas all seemed to be working normally, and that his thyroid gland (often associated with skin problems) was healthy.

Molson’s tests didn’t reveal the presence of any parasites, but there were large numbers of bacteria and yeast both on the skin, and in the ears. This indicates a bacterial and fungal infection, which was likely secondary to atopy, or allergies. As mentioned above, atopy results in pruritus, and excessive scratching occurs. This scratching causes microabrasions, or tiny cuts in the skin, allowing bacteria and fungus from the environment to enter. These infections intensify the scratching, and a cycle starts. These infections may also be the source of the odour that many owners complain about in their itchy dog.

Molson was immediately placed on antibiotics, antifungals, and a corticosteroid. Corticosteroids are commonly used in allergy cases, in order to eliminate the scratching and allow the pet to have some relief, and the skin to heal. Molson was also bathed in a medicinal shampoo, and was scrubbed in his problem areas daily with an antifungal wipe. An immediate improvement was noted in his comfort level! Over the next several weeks, Molson’s skin gradually improved, the redness disappeared and hair started to regrow! He has since been adopted, and although he will likely always have to take medication to control his allergies, he is a much happier, and much hairier dog! 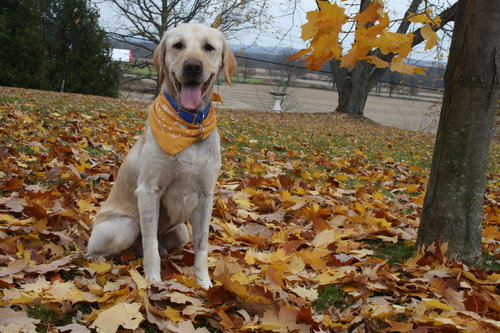 Please note* Our Hospital(s) will remain closed on Sunday and all major Holidays during this unprecedented time as an added step to optimize the safety for clients, patients and staff

Our Hospital Team is available for emergencies for your pet during our Hospital Hours (905) 845-1234.

In the event of an after hours emergency with your sick or injured pet, please call the Mississauga Oakville Veterinary Emergency Hospital (MOVEH) at (905) 829-9444