“Black Jack” was rescued from a shelter by Labrador Retriever Adoption Services at approximately 7 weeks of age. He was brought to the shelter after he was found as a stray, limping. On examination, “Black Jack” was very painful on his right hind leg, and radiographs (xrays) were taken in order to determine the full extent of his problem. On radiographs, “Black Jack” was found to have a transverse fracture of his femur. The femur is the ‘thigh bone’ in the hind leg, and is the biggest bone in a dog’s body. A transverse fracture is a fracture that crosses the width of the bone and is at an angle of no more than 30 degrees to the long axis of the bone.

“Black Jack” had surgery to repair the fracture in his leg. The fracture was reduced (realigned into proper position) and a plate with 5 screws was placed on his femur in order to stabilize the fracture. By keeping the fracture reduced and stable, the body encourages the bone to proliferate and new bone forms in the fracture site, eventually making the bone as good as new!

The length of time needed for full healing depends on the area/extent of the fracture, the level of stability of the reduced fracture, and the age/general health status of the patient. Because “Black Jack” was so young at the time of fracture (therefore had great healing abilities), and because the plate provided significant stability, “Black Jack” was back to bouncing around in typical ‘puppy-ness’ in no time! He was adopted shortly after his repair surgery and spent the next 8 weeks recovering in his new home. Follow up radiographs at his 8 week check-up indicated that the fracture had healed well, and the plate was ready to be removed. A second surgery was performed to remove the plate, and “Black Jack” is now ‘metal-free’! He is thriving in his new home! 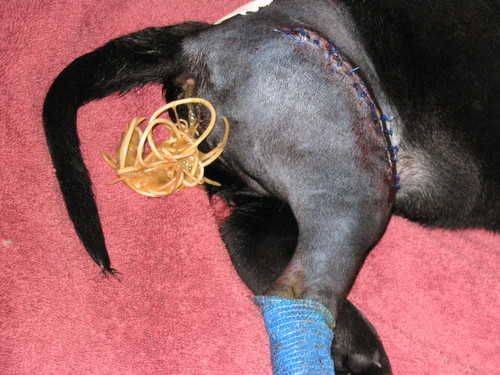 As an aside, while “Black Jack” was under anesthetic for his fracture repair, it was discovered that he had roundworms. Roundworms are a very common type of gastrointestinal parasite in puppies and are contracted directly from the mother in utero, through milk when nursing, or by consuming contaminated soil. Roundworms are generally detected through fecal samples at routine puppy examinations, and are an easily treated infection. In “Black Jack’s” case, the worms were found very shortly after administering anesthetic. Anesthetic causes intestinal worms to become hypermotile (excessively mobile) and they tend to look for an exit from the gastrointestinal tract very quickly! Once anesthetized, “Black Jack” defecated a large amount of the still-live worms! Upon awakening from anesthetic, he was treated with a dose of an anthelmintic (an anti-parasitic drug) in order to treat the roundworms.

Our Hospital Team is available for emergencies for your pet during our Hospital Hours (905) 845-1234.

In the event of an after hours emergency with your sick or injured pet, please call the Mississauga Oakville Veterinary Emergency Hospital (MOVEH) at (905) 829-9444